Put together by Live Nation, the 16-city tour will kick off September 28 in Philadelphia, PA and make stops in Toronto, New York, Chicago, Atlanta, and more before wrapping October 31 in San Francisco, CA.

Tickets will go on sale to the general public beginning Friday, June 22nd at 10am local time at LiveNation.com. Citi® is the official presale credit card of the 88rising tour.

The track is as dreamy as it is imaginative and features Joji, Rich Brian, Higher Brothers and AUGUST 08.

debut), KOHH (USA debut), with more surprises to be announced in the near future. General admission and VIP tickets are on sale nowHERE . Click here for more details.

Head In The Clouds will be a full day music and arts festival in downtown Los Angeles and the ultimate live manifestation of 88rising’s fast rise in music and youth culture – bringing the new definitive experience celebrating music and art from the East and West. 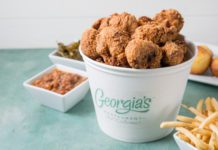 Coping with Muscular Dystrophy – A Caregiver’s Story Part 2 of...

Coping with Muscular Dystrophy – A Caregiver’s Story Part 1 of...

Beverly Hills Glamour for Valentine’s Day? Say ‘I Do’ to...

Coping with Muscular Dystrophy – A Caregiver’s Story Part 2 of...