In the competitive Halloween season, “Horror Made Here” blends its backlot tours & production design walkthroughs with haunted mazes & an encore presentation of “The IT Experience: Neibolt House Hollywood.”

Your escape from reality begins with a visit to the Stage 48: Script to Screen experience to see props and costumes from classic horror films. For example, we took photographs of the crucifix from The Exorcist & the outfits worn by The Losers Club from IT, but there are many other set pieces to feast your eyes upon. On a non-horror note, you’ll be able to stop by the working, branded replica of the Central Perk Café from the TV show Friends as well as design your own Bat Mobile & even ride one in front of a green screen (or a Harry Potter broom if you’d prefer). Exit through the gift shop ‘as they say’ and be sure to visit the adjacent coffee shop to get amped for the horrors that await just outside.

For anyone who missed the house “Where IT Lives” during its stint on Hollywood Blvd or simply want to experience it again, the Neibolt House has been relocated to the Warner Bros backlot & featured as a staple of this year’s “Horror Made Here” experience. As you enter the 5,000 sq. foot house, you’ll be guided by Georgie through multiple rooms of frightful film-inspired scenery complete with actual set props, live actors & state of the art lighting/audio. An assortment of jump scares & cinematic reenactments will keep you on your toes throughout what is clearly the main attraction of all mazes given its size & scope.

However, the horrors of IT don’t end there as visitors can also take part in a VR Experience physically located in the back of a school bus, yet virtually set in the depths of Pennywise The Clown’s sewage lair. As Georgie… err Pennywise says, “you’ll float too” & you’ll get your chance to with this immersive audio/visual VR experience.

Labeled with a Derry curfew warning on its school sign, one might assume another IT attraction, but inside this scare zone is a fog-filled gymnasium recreated from A Nightmare On Elm Street. With multiple Freddy’s lurking throughout & fearful students running to hide, this maze is an effective, albeit brief trigger of your deepest nightmares

With authenticity at its forefront, “The Conjuring” house contains relics from Annabelle’s haunted legacy & all photos are prohibited (the only one we were able to snap of Annabelle was from the prop tour in Studio 48). Meanwhile, your guide plays the role of being “just as scared as you” as trepidation mounts & scenes from The Conjuring 2 such as that of the Valak Painting, come to life before your very eyes.

If the lines are long or you just need a break from all that walking, take some time to embark on a special nighttime guided tour to sets and stages where classics like The Exorcist & Gremlins were filmed. You’ll be seated on a “multi-car” cart & driven around the spooky backlot for about 30 minutes  as your driver tells stories of pertinent horror film history & Scare Actors surprise at every turn. Tours depart from just outside of Stage 48 ( which borders the event grounds)  and leave every 15-20 minutes until their designated stoppage time later in the night.

As far as the sweet & savory are concerned, there are plenty of appetizer, entree & dessert options at the food trucks on-site in “Town Square,” but be prepared for a long wait if you’re there on a busy night. Adult beverages are also available at separate stands without much of a wait. Photo opps are prevalent with Pennywise in the sewer & in front of the historic circus wagon. Additionally, Freddy’s & Georgies aplenty are roaming freely and are more than happy to stop & take a picture.

With it’s final weekend approaching just before Halloween, be sure to pick up tickets for this unique backlot tour meets scare fest as the sets are extremely well crafted with authentic props & the overall experience truly brings you closer to some of your favorite horror films. 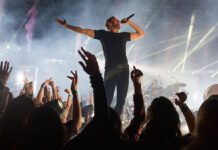