The 2017 Western Foodservice & Hospitality Expo is proud to announce that the recipient of this year’s TORCH Award, which was created to honor talented chefs for the brilliance of their careers and the impact they have had on the industry and their surrounding community, will be Curtis Stone, chef and owner of restaurants Maude and Gwen. The Torch Award presentation and culinary demonstration by Chef Curtis Stone will take place on Monday, August 28 at 2pm during the 2017 event at the Los Angeles Convention Center in Los Angeles, CA.

Related: Fruits and veggies need a campaign as bold, bright and colorful as they are. Find out how!

“We are honored that Curtis Stone will be joining us at this year’s event,” said Tom Loughran, Vice President, Western Foodservice & Hospitality Expo.” Along with his successful career as a chef, restaurateur, media personality, businessman, and New York Times best-selling author, Curtis’ strong commitment to giving back, offering second chances to individuals by hiring through Chrysalis and his #Commit2One philosophy made him the obvious choice to be this year’s Torch Award recipient.”

In February 2014, Curtis opened his debut solo restaurant, Maude, in Beverly Hills, which has garnered accolades from the James Beard Foundation, TIME/Travel & Leisure, Eater LA, LA Weekly and more. Last summer, Curtis partnered with his brother Luke to open one of the most anticipated restaurants of 2016: Gwen Butcher Shop & Restaurant, in Hollywood. Gwen is a European-style butcher shop and fine-dining restaurant, and since opening, Gwen has received acclaim from LA Weekly, Eater National and, among other notable credits, was also listed on The Robb Report’s “Best of the Best New Restaurants in the World.”

Each year, Curtis strongly commits to one cause or organization. This year, he is working with and has employed a significant number of his restaurant staff from Chrysalis, a Los Angeles-based nonprofit dedicated to helping low income and homeless individuals become self-sufficient through jobs.

This fall, Curtis will be hosting his first season of Moveable Feast with Fine Cooking on PBS and will return to the Top Chef franchise as head judge of Top Chef Junior airing on the Universal Kids Network and Bravo.  Recently chosen as Eater’s “Los Angeles Chef of the Year,” Curtis also serves as CEO of Stone’s Food Inc., his culinary-focused consulting, content, and partnership company.

The award presentation will take place at the show’s Center Stage Theater and Chef Curtis Stone will present a culinary demonstration as well as sign copies of his book, Good Food, Good Life.

All attendees of this year’s Western Food Expo will have access to the presentation as well as 40+ hours of education and culinary events including the annual Culinary + Cocktail Clash, Rapid Fire Challenge, and more. Registration is available at www.westernfoodexpo.com 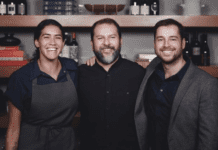