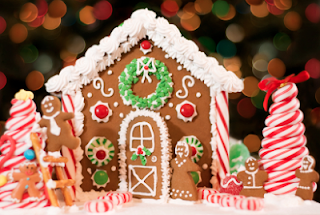 Making gingerbread houses when you were a child is a tradition most people have done at least once, and many will go on to make them with their own children. It is a fun and festive tradition around the holidays, but most of us don’t actually know where this tradition came from or how its link to the Christmas season began. Making gingerbread houses stems from a long history of baking gingerbread in Europe. For centuries, all kinds of gingerbread has been made — sweet or spicy, soft or crisp, thick or flat. Despite these differences they were almost always cut into different shapes, such as people, stars, or animals, and colorfully decorated and dusted with sugar.

Ginger was discovered to have a preservative effect when added to pastries or bread. This development was most likely the reason why it became a key ingredient in many ginger cakes, cookies, and breads. In the early seventeenth century in London, many of the cakes prepared for the holiday feasts were ginger. These ginger pastries were seen to be such a delicacythat it was even considered a profession to make it. These professionals had the exclusive rights to make gingerbread — except on Christmas and Easter.

During the nineteenth century, the creation of gingerbread houses first surfaced. During the Grimm brothers’ collection of German fairy tales, they stumbled upon Hansel and Gretel, the story of two children who discovered a house made of bread, cake, and candy. After this discovery, towards the end of the nineteenth century, composer Englebert Humperdink created an opera about Hansel and Gretel and the gingerbread house. This created the German tradition of making “lebkuchen” houses around Christmastime.

Settlers from Northern Europe brought with them many customs and traditions when they immigrated to the United States, one of them being the creation of gingerbread houses. Now, many years later, nowhere in the world has as many variations and recipes using ginger.